A five minute drive from Pebbleditch is the market town of Tinkle. Tinkle has a museum, part of the Natural History Museum, filled to bursting with stuffed animals. Not cute little teddies and cuddly piglets but life size lions and apes and much, much more, all stuffed by a taxidermist (or two). Mavis was not too keen on this museum when we first visited it. It may have been the polar bear in the first display case by the entrance, that put her off, or the brown bears and lions snarling from behind it. Whatever it was it must have looked pretty terrifying to a four year old. Eventually she was persuaded that a dressed flea was worth running the gauntlet of the bears, birds, and wildcats and we made it past the front entrance.Soon it was a regular event on a wet afternoon and we would meet friends there and do the treasure hunt and enjoy a cup of tea in the cafe.

One day on one of these trips, Mavis’s little friend announced that these were real, proper, actual animals. Mavis’s bottom lip began to tremble and I sensed we were about to go back to square one – the entrance. Hastily I explained that yes, these animals had once been alive but that they were now in heaven (I’m such a hypocrite!) and didn’t need their bodies any more. Mavis was placated and we continued with our outing.

Time passed and some months later Mavis and I had nipped to our local Tesco to get some money out. It was early November and an elderly gentleman was standing near the entrance with a tray of poppies. Leaving Mavis in the car I dashed to the cash machine and then to the man and returned with a poppy for each of us. “Why have you bought me this?” asked Mavis

“What’s a soldier?” came the reply.

“Well, they protect us from bad people who want to attack our country.”

“Do they have tails?”

“What? Oh, no they’re men, they have guns and helmets” I was beginning to wish I had never started this, I didn’t really want to talk about death to a small child. The conversation had other plans though and before I knew it we were discussing burial and cremation and I was getting rather uncomfortable. “Look” I said “It’s very sad that the soldiers died but they don’t know that they are dead, they have left their bodies behind and gone to heaven” (there I go again.)
Quick as a flash Mavis enquired “Are they in Tinkle museum?”

Well that would be interesting!

As a post script: We were all watching Bambi quite recently. We got to the very upsetting part where Bambi’s mummy gets killed and Mavis was a bit unsure what had happened. “Is she dead?” she asked

Mavis, slightly puzzled, asked “Is there a museum there or something?” 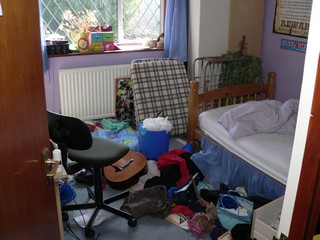 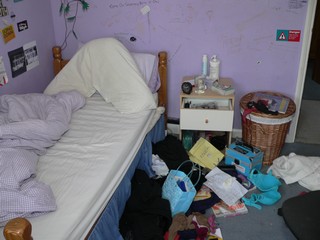 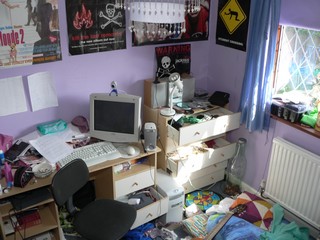 Above are three pictures of Horace’s bedroom floor. Just to prove I’m not exagerating below

In many ways it is easy to forget that ‘The Teenager’ is part of the family. She doesn’t want to go out with you – unless there’s something in it for her, she appears only at meal times, she is not often at home as she is staying the night with a friend and when she is at home she is either on the computer, horizontal watching the television or sleeping off the excesses of the night before.
END_OF_DOCUMENT_TOKEN_TO_BE_REPLACED