“Do you know what a tumbrel remark is?” Whizz enquired this morning. There was a pause while I tried to dredge from my memory the meaning of the word tumbrel. Was it some kind of geographic feature, a hill perhaps where someone might make a lofty statement? No, that was tumulous – I think. Defeated I replied in the negative. “It’s something a person of great wealth might say that demonstrates their complete lack of understanding of the lives of the rest of us. Like the Queen Mother saying I can’t see the point of being poor”.

“Or,” I continued, not realising how accurate I was, “Marie Antoinette saying Let them eat cake”.

“So what’s a tumbrel then?” I ask, heading, as is my habit, straight for Google to look it up. Turns out it is a wagon used mainly to take French peasants for their final journey before finding themselves either side of a guillotine blade. hence the relevance of the reference to Marie Antoinette.

I continued my search looking for ‘tumbril remark’ (it can be spelled either way apparently) and I came upon a blog by a writer of whom I had never heard but is now on my book list because I giggled all the way through it (I didn’t have time for all this you understand. I was supposed to be making soup, doing the washing up and all those other riveting tasks that press upon the unwary, undirected, in demand mother-at-home). Her name is Donna Andrews, an American lady with what I consider to be a very English style. Her definition of ‘tumbril remark’  is as follows:  something that displays “the subconscious mentality of the uncontrollably well-off…the essence of polite upper-class incredulity at the sheer inconvenience of having to put up with other people.”  I hope she will forgive me for quoting her if I include a link to her blog: http://donnaandrews.typepad.com/donna_andrews/2005/11/index.html .

I started to browse her blog and the links to other web sites and I wondered, as I got a picture of her life, small kids, family outings, domestic crises, how she finds the time to not only raise her family but write a blog and AND churn out several novels. Is her house chaos? Do her novels earn her enough to pay a cleaner? Did she just start early in life and so was established before she began sprouting sprogs? I must ask her, now I’ve found her.

She did me a favour though in that I am now burbling away happily on my own blog. The novel WILL continue.

She brought to mind another impressive lady whose story I read in the Waitrose magazine (so much to do, so little time …). Charlotte Hume wanted to encourage her son to eat vegetables and embarked on a quest with the help of her blog readers, to try eating through the vegetable alphabet. She and her son tried a rainbow of exotic and wonderful vegetables from Artichokes to Zucchini and her son reviewed them on her blog http://expatriateskitchen.blogspot.com/  . All this is now in a book ‘The Great Big Veg’ published by Vermillion.

Two things impressed me about this:

1. She posed a question on her blog, something to the effect that she wanted recipes for the vegetable alphabet and BY THE NEXT DAY had received replies! I pose questions on my blog and even family members don’t answer them.

2. She published a book from her blog even though she has a young son and all that other stuff like cooking – cooking vegetables in the main I suppose. Now this is an excellent idea. Find a band wagon, write about it then turn it into a book. I know Charlotte is not the first to do this but I wonder if I can do it. It’s like having a domestic solution to a creative urge.

I already manage this with my art. The only things I paint are walls, pots and furniture. Mavis has an underwater theme in her bedroom with an unpleasant looking octopus leering at her from one corner (below). Horace had a jungle with a tiger skin (painted, not the real thing) ceiling. Recently she also ‘commissioned’ some flower paintings for her new flat in Leeds. In our lounge we have a large pot that matches three oil paintings bought for the princely sum of £4.50 each from Dunelm Mill. The pot was painted by yours truly. In our hallway there is a chest of drawers embellished with hand painted teddies – that one’s due for a make over I think! For Horace’s 18th birthday Whizz made her a blanket chest and I painted it to match the seat cover that I also added and ‘upholstered’ (below below). 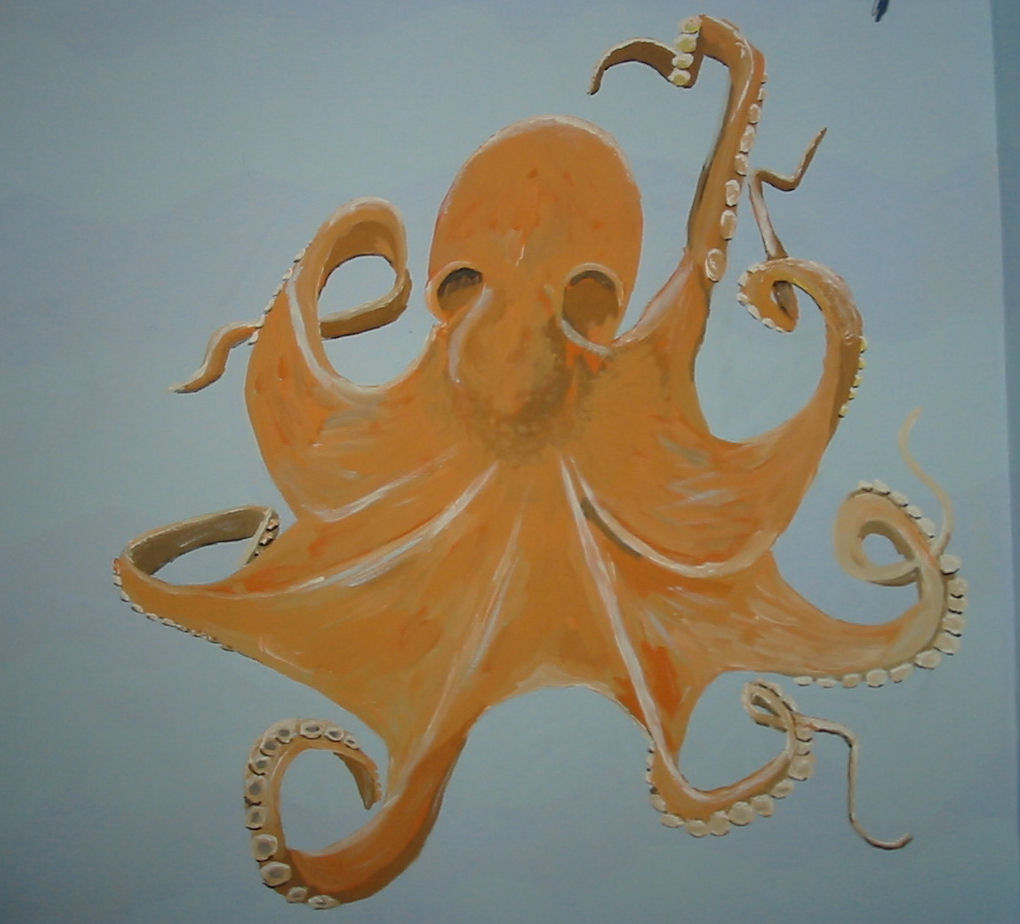 It saves on the guilt trip you see. If you can benefit the family and satisfy creative urges in yourself then It’s the perfect solution. It doesn’t help you to earn money from the pass time though. That’s what I’d really like to do. Somebody once said “But you don’t HAVE to do work so why do you want to?” if riches include creative satisfaction then I would define that as a tumbrel remark!