This weekend, following the Silver Wedding party of some friends, Whizz offered to take me to look at the tiny cottage nearby, where I had lived for 5 months of marriage at the age of 19 – as I write this it would be 35 years ago.

I had a pretty clear picture of the cottage: wee windows, double fronted and shared with another couple.

We paid the princely sum of £4.50 per week for the honour of living there and for that sum we had use of a tiny living room at the front with a ceiling about 6ft high – between the beams, A galley kitchen which was formed for both sets of tenants by a flat roofed extension that ran the right across the rear of the property and looked out onto a bramble filled space behind, about 2 yards deep at most. I don’t remember any kitchen units although there was a sink and a work top beside it under which was housed the bath – never used as it was filled with spiders and other wildlife. I don’t remember ever having a bath or a shower so I suppose I must have strip washed in that little kitchen that had, as far as I remember, no heating.

In the kitchen I had something called a flatley drier. This was donated by friends of my in-laws and was for drying clothes. It consisted of a white metal box about three feet high, by two feet, by one foot six. It had a heater inside at the bottom and several narrow, wooden rails across the top over which clothes could be hung. A metal lid was then put over the hanging clothes while they dried. The first time I used this contraption I didn’t clean it or anything and I imagine it had been in somebody’s garage for months, even years. it was very old fashioned, even then. When the clothes emerged, stiff and dry, they all had a grey stripe across the middle from the very grubby rails.

If we went out of the living room towards the middle of the house we arrived in a hallway that was technically not ours but belonged to our neighbours, Houseman and Swiss-head. They were already friends of ours and they had suggested that we move in when their original neighbours moved on to a house of their own. We had to use their hallway to get to the stairs which led to a landing with a bedroom for us on the left and one for them on the right.

You may have noticed that there is no mention of a toilet. Well, it did exist but it was outside our back door, at the opposite end of the kitchen to the adjoining wall. We were lucky; we only had to nip across a small covered open space to get to it whereas Houseman and Swiss-head had to carry their night time bucket through the front door and along the path in front of our living room window, round the side and into the loo. This ritual, Swiss-head carried out meticulously every day before heading off to Ledderhed to help remove a seemingly ‘bottomless’ supply of haemorrhoids, in her job as an operating theatre nurse.

Swiss-head was very hygienic, I suppose it was the nurse job that encouraged this attention to such details as daily slopping out. I was more interested in having a good time and our Victorian gazunder resided beneath our bed until it was almost full to the brim. We had a party once and everyone threw their coats onto the bed. After they had gone I was horrified to notice that the pot with its amber contents was half exposed for all to see and for some coats, possibly, to dip into. 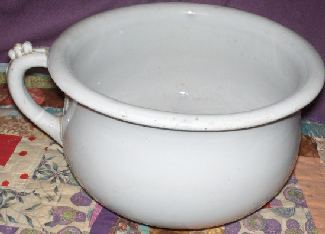 The walls of the toilet were painted bright orange and there was a felt pen on the cistern for anyone wishing to add graffiti. The only proviso was that it should be clean enough for Granny to read. Over the months various jokes decorated the walls along with the continuing saga of Eric the spider whose tiny footprints trailed across the ceiling and down walls, stopping at various placed to carry out unremembered tasks.

If you looked out of our bedroom window there was a grassy common and sometimes, when Swiss-head wanted and early night (the nurse job again) and Houseman was more drawn to the conviviality of our guitar playing, beer swilling, bacon sandwich eating Saturday nights, Swiss-head would ‘leave home’. This would involve some choice language through our living room door followed by the slamming of their front door as she ‘ran away’ round the common with Houseman in hot pursuit, apologising, and pleading for her to come back.

Theirs was a very passionate relationship with Swiss-head either in high temper or deeply loving and I often wonder if they managed to sustain the excitement or if it became too exhausting and they parted for calmer waters.

A regular Saturday night activity was a trip to the hotel at the end of our lane for a few pints and then back to the cottage for Three Card Brag. All our friends had a tin full of pennies for the purpose of betting – the stakes were high: maximum ante was a penny and if you had a strong hand you might go up to £5 to see your opponent while everyone looked on with bated breath. This was tame stuff compared to the card games of my parents who, I was shocked to discover on their golden wedding, were apt to play strip poker with their friends, many of whom were coyly sitting in the audience as my dad regaled us all with tales of how bad they were at the game. Very disconcerting! Anyway, our own nights were much more tame although a certain amount of groping was apt to take place at parties and many marriages ended (my own included) because of the promiscuous 1960s and 70s attitude to sex that I’m sure was not present at the Strip Poker games of my mum and dad.

When Whizz and I went to have a look at the cottage I was stunned to find that I didn’t recognise anything. There was a dear little town which I’m sure must have existed when I lived there but I don’t remember it at all. The ‘common’ had shrunk and the cottage, I discovered through Google, was hidden amongst a group of new houses, but at least it was still there. It is a listed building so should not have changed when I go back and eventually find it!