Whizz and I have spent months agonising over whether to buy a dog. First (for me at least) was Horace’s attitude to the decision. Horace had been flatly refused a dog when she was Mavis’s age. She is not Whizz’s daughter so I was anxious that she would not feel rejected if Mavis had a dog and she hadn’t been allowed one.

Secondly came the worry about how much we would be tied down. No more casual weekends away or holidays in the sun, well not for a while anyway.

The cats were a serious consideration. They are both old and used to their routine.

Then there was the cost: Dog, insurance, vet’s bills, food, damage and so on.

Next consideration, the upheaval and extra work involved in training a puppy. I spoke to lots of people, most of whom said Don’t do it! Followed some time later by But I wouldn’t be without him.

And that proved to be the crux of it. Not inconvenience, not cost, not the commitment but the love and life a dog would bring to our home.

We were careful to manage Mavis’s expectations. We would wait until the summer when the cats could go outside at night; we must be sure that we chose the right breed and character of dog, this may take some time so don’t expect one tomorrow.

Whizz and I had both had border collies crossed with something, in my case, a labrador. Both of us agreed that they were wonderful, intelligent pets. So as we lay in bed that night I said ‘How about a Lab/collie cross?’ Whizz said ‘Good idea’ and that was that.

The next day I started trawling the Internet to discover that that particular combination of breeds was pretty rare. Then I happened upon a litter, ready to leave their mother, on a farm in Lincolnshire (Miles away). I rang up and arranged the appointment for that afternoon. Again we firmly explained to Mavis that we might not get a dog, we were just looking and even if we chose one, we couldn’t take it away that day as we weren’t prepared at all.

We drove up, fell in love, paid a deposit and two days later went back to collect him. The most difficult thing was choosing his name. There were three of us to please and for each name two of us loved, the third one didn’t like. Mavis wanted to call him Dumbledore. Whizz and I drew the line at shouting ‘Come here Dumbledore’ across the park. Then she wanted doughnut; Whizz didn’t like that. Whizz liked Skittle, I didn’t. I said we must decide on a name before we picked him up and we finally settled on Milo at the eleventh hour. 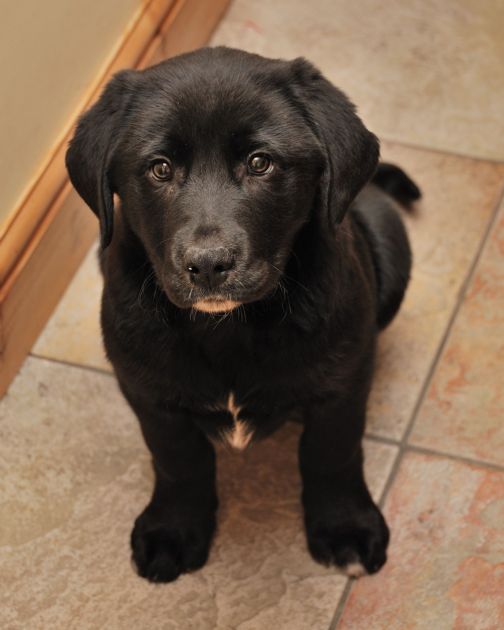 Who could resist him?

Unfortunately Whizz, who has been a bit short on work lately, found himself inundated, and is currently staying in Lowestoft, returning briefly for a few days before heading off to South Africa for three weeks. Sunday night was Whizz’s first night away and Mavis got the tummy ache. She was weeping and wailing while Milo was having a psychotic half hour. He attacked a cushion, I took it away, he grabbed another and tried to murder it. I took that away. Mavis was wailing ‘You don’t care about me, you only care about Milo!!’ I tried to reassure her as I watched Milo squat down and pee on the carpet. I cleaned it up, Mavis groaned. I knew we must have a conversation about going to school in the morning and we started one of those debates that can only be had with a 10-year-old. ‘Mavis, you know this isn’t bad enough for a day off school.’ Said I

‘But what if I’m still ill in the morning, can I stay off then?’

‘You’ll be fine in the morning now let’s get you to bed. Milo! No!!!!’ I stopped him from joining us on the sofa and returned him to the floor from whence he sprung straight back up beside us. After several repetitions of this he finally got the message and with a sigh, slumped to the floor and dozed. Thank goodness!

Back to the discussion. I had an eye on the clock and was now thinking that it would be nigh on impossible to get Mavis up in the morning. It was about 10.00pm. My resolve was weakening, after all she might really be ill. ‘OK,’ I decided, ‘We’ll watch the end of Masterchef together (foodie as ever) then you can go to bed in my bed and I’ll ring the doctor tomorrow. If the doctor says you are well enough then you can go to school straight from the surgery.’

This morning we went to the doctor’s and she said Mavis had a raised temperature (.5 degrees) and a mysterious stomach pain that was not caused by her appendix or anything else serious. She said I should keep her at home until the pain went away. Talk about giving Mavis an open ticket to stay at home.

The dog will have to howl his time away until I can return to clean him up and give him, and the house, some fresh air before returning to the pub kitchen. By the evening he will be stir crazy and I envisage a cushion battle occurring again!