The last time I posted was at the beginning of the month. We had been ill.

Things didn’t get any better.

On 12th December we had a bit of a gathering in anticipation of Christmas. It was good fun, the last good fun we had. Oh woe are we!

On 13th he was confirmed as having a detaching retina that needed surgery.

On 14th he had the operation.

He came home on the same day feeling very poorly and needed drops in his eye several times a day. He was not allowed to move from his left side for at least 10 days. This took us to the day after Boxing Day (I mean 26th December. Apparently Boxing Day this year was yesterday or some such silly, alleged nonsense!)

Lying in one position is very uncomfortable. He even seems to have a bed sore on his left ear!

Meanwhile I have cleared up after the party, shopped for food and presents, wrapped them, written cards and letters to go into them and put them in the post. I have made up beds for guests, walked the dog, cleaned the house and so on….

This is my sympathy motion. My husband has definitely suffered more but I have worked my effing socks off and I am now in deep shock. I have in fact hit the bottle and don’t intend to relinquish it until next year. I intend to spend the rest of the year reading my new kindle and trying to ignore the needs of others until they coincide with my own. 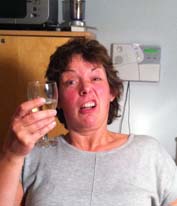 Firstly I have to apologise to my husband for the implication that he is too lazy to cook. The reason that cooking seemed too much trouble for him yesterday was that he has been poorly too. My comment that I don’t know why I bother was more to do with the fact that he’s more enthusiastic about eating beans on toast than my delicious home made creations.

Here he is, with a slightly wider me… 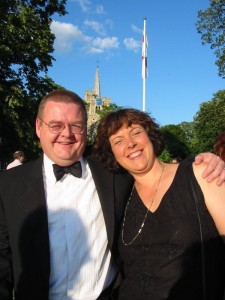 Anyway, a positive spin on this illness is that it has put me off my food. Losing my appetite has never ever happened to me before. I wonder if the low carb eating that put me back in touch with my stomach, is the reason for this.

So this morning I weighed myself and I had lost another pound. Seven pounds to go until I reach my target – unless I lower the target further along the line. I was pretty chuffed to see the scale lower than it’s been for maybe twenty five years. Then I started undressing in front of the mirror (I won’t put in a picture of this) and I noticed that my body doesn’t look at all like it did when I weighed this amount twenty five years ago. My breasts now look rather like sausages, the skin on my tummy looks like the skin on custard and the skin on my inner thighs is like the overflow from a chocolate fountain.

It’s interesting to note that all these analagies are to food. It doesn’t look like I have completely conquered my unhealthy relationship with it, does it?

Today I’ve been ill, nothing serious, just a cold but I haven’t had a cold in years so it’s been particularly horrid.

So here’s what I haven’t done: 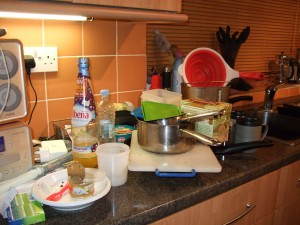 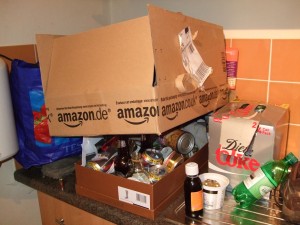 No dog walking. Whizz took him but the dog looked a bit worried… 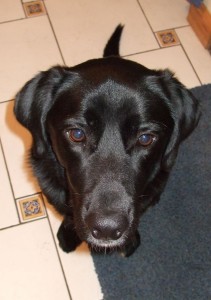 No cooking – to speak of. To her delight Mavis had an enormous burger, enormous because I only had one bun left, and that was for a sausage! 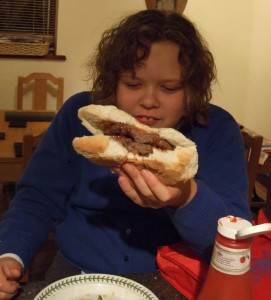 And Whizz, who was about to have nothing for lunch because it all seemed too much trouble, discovered this in the cupboard… 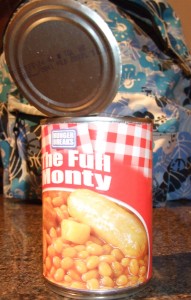 You’d have thought he’d made himself something cordon bleu. I don’t know why I bother.

Meanwhile, yesterday, when I was feeling a bit healthier I made some low carb bread. It sounds like an oxymoron doesn’t it? I sent for the mix from

I was so excited to find this website as low carb stuff has been very hard to get. I did promise myself only two slices per day but because I’ve been VERY lazy today I’ve had two sandwiches. Oh my, the wind!

It looks the part… 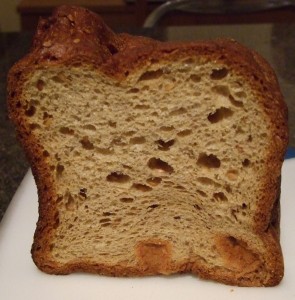 But it tastes rather like a bath sponge with a crust on it. Whizz says that Crusty Bath-Sponge sounds like a companion for Bertie Wooster!

Anyway, the house looks like a bomb’s hit it so I hope I get better soon – and that nobody comes to call!