I think I’ve mentioned that Whizz and I were considering the acquisition of a second mut.

On Saturday morning, the first day of the half term break, which is usually allotted as lie-in morning, we found ourselves, at 8.30, meeting a van from Ireland that barked.

We had been up since 6.30 and were in need of coffee but instead of that we were soon walking in a wood with a scrawny little cross bred labrador/terrier trying to get a positive reaction from her in regard to Milo. To be fair they didn’t tear each other’s throats out, in fact they hardly seemed to notice one another but, and possibly with hindsight this could be seen as naive, we went ahead and brought Nellie home. We now own Smelly Nellie and Smiley Miley 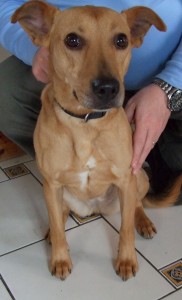 We all think she’s brilliant, apart from Milo. She loves us all, apart from Milo. Poor Miley is to be found cowering in corners while Nellie trots about, head held high and snarles at him if is even looks at her. In fact he doesn’t look at her, making eye contact is a very challenging act in the animal kingdom.

Whizz and I were mortified. Poor old Miley, what had we done?

On day one she was positively hostile. On day two she snapped a lot and then took herself to her bed to save us the trouble of sending her there. She’s a bright little thing. Today is day three and there has been a lot less snarling although Milo is still petrified if her.

In between snapping she has been adorable with us humans, sitting contentedly at our feet or having her tummy rubbed, while Milo slinks around in the background waiting for her to leave so he can have a fuss too. Of course we are very careful to make sure he gets his fuss and that she is chastised when she snaps at him. Milo has developed a very forlorn expression that breaks our hearts. We only wanted another dog to keep him company. He used to get very bored in the evening. Well, I can categorically state that he is no longer bored. 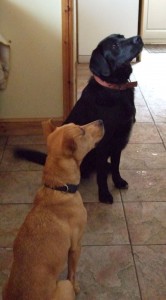 In this picture they are both focussed on treats so managed to sit (almost) side by side.

I have spoken to our dog obedience trainer and also to the lady at the rescue centre and they both say the same: she’s stressed, give her time, make her feel secure and she’ll soon calm down. So we are sticking it out and hoping that Milo won’t be overly harmed by his experience with her.

What a couple of nutters (I mean us, not the dogs)!