I’ve just read back through the previous post about the dogs and I think things are slightly better. Milo no longer slinks about, he has re-established his place in the family -in fact he is rather bossy with Nellie, particularly if we are in the picture. I think it’s right to say that Milo is possessive about Whizz and I, and Nellie is very possessive about food.

Today Whizz, Mavis and I left the dogs at home and went to a local garden centre. While there we spotted a pet area and as we were running short of the extremely expensive, low alergen food that we need for Milo (so have to give to both dogs) we decided to purchase a truly enormous bag for the outrageous price of £45.00!

When we got home, Whizz dumped the bag in the utility room and Nellie immediately took up her position. 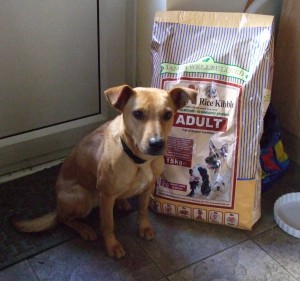 If Milo came anywhere near she showed him her teeth.

Another unfortunate trait of hers is to take a sudden and random dislike to other dogs. Most of the time she is absolutely fine but occasionally she will just attack. Getting her under control on these occasions is difficult. Sadly this misbehaviour means that we must keep her on the lead when walking – so she can’t chase the ball we throw and can’t go down rabbit holes, something she and Milo both love to do. Her determination to get to burrows invariably results in my having to crawl, grumpily through brambles to untangle her lead.

Milo’s love of bunny digging has resulted in the loss of several balls. Here follows the usual sequence of events: We throw him a ball, which he chases with enthusiasm, he catches it and then he catches a whiff of rabbit. Ball still in mouth he hurtles off into the undergrowth while we yell “Drop the ball!!” He doesn’t hear us and continues delightedly into the prickles; so we shout “Don’t drop the….. o-o-o-h there goes another one”. There is one particular burrow that must contain about six of our balls, a quite puzzling circumstance for the occupant.

I was delighted to find that my new do-everything mobile ‘phone had an FM radio application theoretically making it possible to catch up with The World at One while walking the dogs. I discovered quite quickly though that in order to pick up a signal I have to walk, holding the phone with my arm raised like a school kid needing the loo. This combined with the necessity of wrapping the aerial round my hat, making it impossible to move my head to look at the glorious scenery have made the radio disappointingly impractical.

First we had the issue of the beds, they both wanted the larger one. Clearly Nellie could fit into either but Milo looked like a muffin top in the smaller one.

Next , quite out of the blue, came Nellie’s desire to get out of the kitchen once settled for the night. One night, Whizz and I were just snuggling down with our books when we heard an almighty bang that made the house rattle. We crept out of the bedroom and soon realised it was Nellie. She would whine then, well we weren’t sure what she was doing but it sounded painful – and futile as the door opens inwards. We went to calm her down, left the side lights on and went back to bed.

Once more she started the banging and rattling and we were worried that she would awaken Mavis. Nonetheless we decided to leave her to it and the thumping and whining went on for an hour or more.

This continued for a couple more nights before I decided that enough was enough and we should bring Milo’s crate back into the kitchen. At past midnight and minus two degrees I was to be found in my jim jams and wellies admiring the clear sky and millions of stars as I unlocked the garage and heaved the, quite sizeable, crate into the house.

I put it up and Milo looked really pleased to see it. He used to love sleeping in his crate and we only put it away because we don’t really have the space for a crate and a dog bed. Once more he was crestfallen to discover the Nellie, the usurper, was consigned to the cage and locked in. It was worth it though as peace reigned throughout the rest of the night.

I was concerned as to the reason Nellie had suddenly decided she didn’t like it in the kitchen. Was it because Milo was picking on her?

Whizz spent the whole weekend setting up a fancy camera that only worked when it detected movement. The following night we didn’t put her in the crate and she was as good as gold. Sod’s law.

The night after though we watched as, quite unprovoked, she threw herself repeatedly against the kitchen door.

So now, the cage is compulsory. Milo sleeps in it during the day and Nellie takes up residence at night. And we have an enormous, Milo sized dog bed in the kitchen as well.

I seem to remember saying that a second dog would make life easier. It would be company for Milo: run shoulder to shoulder with him through the fields, play with him in the garden and snuggle up with him at night. Wrong, wrong and wrong!

So who has the last laugh? 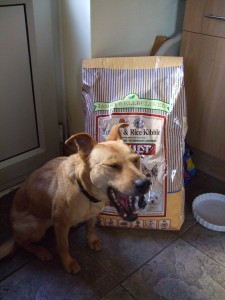