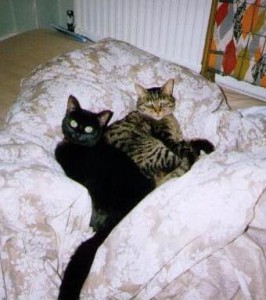 Although we have always loved her, Gizmo, our small, black cat, had a traumatic life, coming as she did from a single parent home. She arrived in our lives when Horace turned seven, a guilt present because I had split up with Horace’s dad. We already owned/were owned by, Ben, a brown tabby with a demanding personality, who peed in the toilet, and had a steel pin in his leg – the result of an argument with a car.

So, about Horace’s birthday preparations – it’s a bit of a shaggy cat story, I’m afraid. Horace and I crawled in the car through narrow country lanes to seek out an eccentric cat lady, recommended by a local. From a kitchen writhing with, and stinking of felines of all designs and ages, Horace selected a tiny patchwork scrap, the smallest and weakest-looking one there. This handful of fluff was not yet ready to leave home so we left, and I agreed to collect it on the morning of Horace’s birthday.

The day dawned, and this being sheep country, and it being the end of November, our world was muffled by a knee deep smother of snow. The lanes would be pretty difficult to negotiate but I had a birthday present to collect, and a party to organise. I rang the cat lady to check that she was expecting me, and the blessed woman informed me, quite casually, that the kitten had died. Good of her to let me know.

I suppose I should have waited for Horace to get home from school, broken the news to her, and promised to go and find another cat when the white stuff had subsided, but remember, I was freshly separated, and Horace was hurting. I could not disappoint her.

I skidded to the local pet shop, and to my relief found several black kittens in a cage, and bought one with nary a thought. On her return from school, Horace’s heart was melted by the sweet thing, and she didn’t show too much disappointment at the amendment to its design. Phew.

Later that week came the birthday party. It began, as they always did, with Hunt the Lollipops. I explained the rules to the 8 small guests and without thinking said ‘Ready, steady, GO!’ They thundered to their task, as I remembered about the small bundle, newly arrived and very vulnerable. I screamed ‘Don’t tread on the kitten.’ Gizzy was almost trampled underfoot. Not a good start.

A couple of years later I met Whizz. He lived in West Ealing, a very long way from North Sheep Country, and from Horace’s father: Husband Number 2. It was a troubled time as I fell in love. The future of Horace, Husband Number 2, and the cats, became insecure. Horace worried about moving house and school, and I worried about Horace. Husband Number 2 was very unhappy, and powerless to control events. The cats, blissfully ignorant, continued to mutilate the furniture and pee in the loo.

I decided, probably selfishly but I’m only human, that I would commit to Whizz. He was such a lovely bloke, everyone adored him and considered him a vast improvement on husband 2. (Sorry husband 2 if you are reading this, but you were generally considered by my loved ones as a bit of a pain), everyone that is, but Horace. Horace was ‘The popular One’ at school, loved her dad and didn’t love Whizz, although she does now. She did not wish to relocate, nor had she any desire to live with Whizz.

There followed a period traumatic for us all, and when Whizz and I decided to live in Blake Robins, for access to Husband Number 2, and Whizz’s employers, and because it seemed like a good place for a hitherto popular 9-year-old to make friends, Horace reached the peak of her unhappiness, and so of course, did I.

As I said before, the cats were oblivious to all this. They went happily about their daily and nightly pursuits of catching and beheading mice, fighting with the local alpha tom cat, and stealing the best seats on the three piece. Then came the day when I moved in with Whizz. With my beloved dining table strapped upside down to the roof, and my worldly goods: Horace, cats, cookware, ornaments, Indian coffee table, clothing and more, I collected Horace from her tearful last day at school, and pointed my Metro South.

For the entire journey both cats kept up their vocal objection. Ben had a low pitched and hollow ‘Mwow’, while Gizzy maintained a plaintive and higher ‘Waa’. Their voices were counter-points to the deep silence from my beloved Horace. My long awaited co-habitation with the man I loved, was marred, nay ruined, by worry and conscience.

We arrived in B.R. and I dragged Horace and the cats into the house. Horace had been there on visits, but of course this time it would be a week or two before she could see her dad again. I wonder how many women carry this kind of guilt with them.

Back to the cats: I opened the fronts of their baskets. Ben, older and wiser, stalked out and began to sniff in a distant and disapproving way. Gizzy shot from captivity into a slot between kitchen cupboards. Sadly, she joined several tea trays, one of which was made of tin. It hit the tiles with a ringing clang.

Our poor little black kitty reacted like one of those cartoon felines. Her hair stood on end, and, if this is possible, all four legs left the floor. She took off like Road Runner, wedging herself between the wall in the utility room, and the microwave, and refused to come out. When I tried to coax her she stared at me with huge pupils, and I decided to leave her there to calm down. It seemed kinder. I don’t remember how long she stayed in that crevice. She did eventually emerge, but she was a nervous pussy cat for ever after.

Over time, things settled. Mavis made friends at school, the cats relaxed and I obtained incredibly lucrative work as a freelance script developer and trainer for Whizz’s employers.

Sometime during all this I decided it would be safe to put the cats out at night. They had been used to being inside during the day and out at night, so it seemed right to return them to their routine. I let them out with some apprehension, and we all went to bed.

The following morning I opened the back door. In came Ben with his usual demanding yowl, but there was no sign of Gizzy. We called her, and searched the area, but days then weeks passed and she didn’t show. Horace was distraught and I felt guilty – I was getting used to the sensation.

The three of us decided to go and see Spice Girls, The Movie. We all enjoyed it, Whizz and I more than we had expected. We were chatting about it as we returned to our new home and climbed from the car. Whizz and Mavis headed for the front door but I had spotted something 100 yards away on the pavement. A small black cat was staring at me. It didn’t move but I was sure it was Giz. I called her quietly and she came slowly towards me. She didn’t rub up against my legs, or seem pleased to see me, but she did stroll in though the front door, where Whizz and Mavis maintained a delighted but reserved, distance.

We don’t know what had happened to her or where she had been, but she became even more twitchy, having panic attacks that caused her pupils to dilate and her fur to stand up like a chimney sweep’s brush.

When Horace won a place at the Grammar School in Duckchester, life became fraught. The bus from Blake Robbins left the local bus stop at 6.50am, and Horace and I were regularly seen careering in the car after the bus, and swerving across the front of it at some distant bus stop. We were all shattered by the long days, and made the decision to move to Pebbleditch, where the school bus departed at 7.40am a vast improvement.

Of course, when we moved, the cats sang their usual duet in the car, and by this time we had an 18 month Mavis in tow as well. It was the day before Good Friday and Whizz, with his inevitable sense of logic, and total lack of moving experience, decided that he would go to Ikea to buy, among other things, wardrobes so that we would have somewhere to hang our clothes. He didn’t want to be caught in the bank holiday crowds, but had no concept of what would be involved in directing the removal men to locate our belongings, with a squawking toddler and a spooked 12-year-old who had decided the new house was haunted.

I can’t remember what we did about the cats. I probably put Horace in charge of them, but I know we kept them inside for longer this time, and were very careful about letting them out for short intervals before a full overnight sortie.

We settled into Pebbleditch life as other posts have indicated, and after a number of years refusing Horace’s pleas for a dog, and later Mavis’s, we had too much to drink one evening, and found ourselves, on the walk home from the pub, admitting that we really wanted a dog and loved dogs. Horace by now was in Leeds, at university, very miffed that we had made the decision too late for her. She hot footed it down the motorway for a visit and to fuss over the small, cuddlesome, puppy that we named, after refusing Mavis’s request for Dumbledore, Milo. He’s nearly 6 now and much bigger. 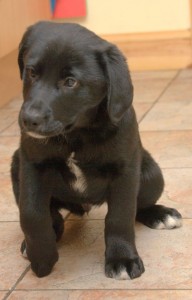 Of course the cats were seriously affronted. After administering a couple of barbed swipes at the enthusiastic pup to show him who was in charge, they moved upstairs.

We now had a divided household. The cats, with litter tray/lifted toilet seat, water and stinking, fly infested food, upstairs in their own bedroom, and a small puppy causing pandemonium downstairs. Whizz chose this moment to go to South Africa on business. I feel I must have reported on this period before, so I will simply state that I never want to repeat the exercise.

Sadly Ben, our peeing-on-the-toilet boy, developed renal failure and had to be put to sleep some years ago. Gizmo, the little black scrap from the pet shop in North Sheep Country, stayed with us until cancer got her a few weeks ago at the venerable age of 19. She remained nervous throughout her life, scuttling under a bed whenever the sound of dog claws pattered across the living room laminate. You would think that a small, shy cat would not leave much of a hole, but I still look for her when I come out of my bedroom in the morning. I’ve forgiven her for peeing straight through the pure silk duvet that Whizz brought back from China, and for puking all over the bedrooms on a weekly basis. I’ve even forgiven her for ruining the carpets and furniture. Milo of course, doesn’t miss her at all.