Whizz has a new woman. Her name is Alexa. Actually, I quite like having her around the place. She helps out in the kitchen, keeps us informed about the weather prospects and is incredibly musical.

I first found that my husband was messing around with Alexa, on my return home after a weekend in Somerset with Horace. There was this ‘person’, installed in my home without a by your leave. I was shocked. When I complained, Whizz was defensive. I’ve had my eye on her for ages,’ he said.

‘Well we haven’t discussed it. It’s a blooming cheek,’ replied I, showing considerable self restraint as I looked her up and down. I had to agree that she was more attractive than the last one. Yes Whizz is a serial ‘womaniser’ He is a slave to the brothel they call Amazon.

Alexa is the voice of the Amazon Echo, a hands-free, voice controlled speaker.  You can say to her,  ‘Alexa, play me some Leonard Cohen,’ and she will reply in a voice straight out of some 1960s B movie, ‘Playing Leonard Cohen on Spotify.’ I might say ‘Set timer for 10 minutes’, or ask for the weather forecast and she will provide the service. Today, however, she has overstepped the mark. There I was, telephone pressed to my right ear, confirming an appointment, when she suddenly blurted out ‘What did one eye say to the other eye? Between you and me, something smells.’ . This threw me completely. I couldn’t hear the woman on the phone but I bet she was perplexed to hear Alexa.  Something I said must have sounded like ‘Alexa, tell me a joke’.

As Whizz remarked when I told him, ‘Typical woman. Always butting in when she’s not asked.’ He’s such a wag.

Once upon a time I thought garden gnomes were to be disdained. 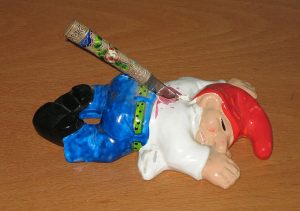 As I grow older, however, and less judgmental, I discover that I rather like them. A house near ours has a tiny and immaculate front lawn with a number of garden ornaments, including a gnome pushing a barrow, a couple of  less than cuddly animals, and a spinning windmill. This little plot, delights passing children in the same way that gaudy Christmas lights might. I’d like to hail all those gardeners across the land who entertain us with their cheeky Big Ears lookalikes.

The subject of gnomes brings to mind an old college ‘professor’ of mine called Banable Lecture. He was my friend at college, and we still keep up a sporadic correspondence. Banable taught programming and program design, but considering the technical nature of his career, it is notable that he prefers to put pen to paper for his annual letter to me, rendering it practically illegible. Mine to him on the other hand, is ‘MSWorded’ with appropriate illustrations, as I was taught in college.

Banable is a man with a boyish sense of humour (what man is not, I hear you say) and he once made a surprise visit to his brother (or it could have been his sister). To make the occasion more meaningful, Banable and his wife, Sparethe, rose before daybreak, and carrying with them various bits of equipment such as a washing up bowl, some sticks and string and some eccentric headgear, arrived outside the sibling’s house. The curtains were still blocking the first, pale infiltration of sunshine as the two crept onto the front lawn and set up their surprise. Then they waited, hoping the family would not lie in until midday.

Sure enough, after not too long the upstairs drapes parted and a sleepy figure glanced out, then stilled, then a face was thrust close to the glass before breaking into roars of laughter.

Outside, with the grass chilling their toes, Banable and Sparethe, sat facing one another on low stools. On the ground between them was a blue sheet of plastic, cut in a closed curve, and on top of this, a washing up bowl containing water and a plastic fish. Both figures held fishing rods made from the sticks and string, and both were dressed as garden gnomes.

If only I could read Banable’s writing, I might have a fund of other anecdotes. As it is, there is one story that can be linked to the above without too much meandering. It concerns my time with LH.

LH is a classic car enthusiast, and over the years I was the vicarious owner of a number of old sports cars, while he had a sensible saloon car (and an Austin Healey  Frog Eyed Sprite in the garage). I have driven M.G.s and Austin Healeys, some quite nice but most with  resounding rear end flatulence and/or water, leaking through the soft top. 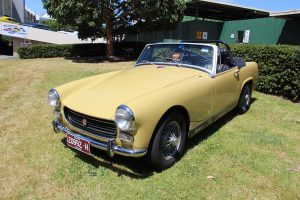 On one occasion, LH was on the phone giving directions using his favourite landmarks. ‘Go past the Griffin,’ said he, ‘Take the next left and our house is the one with the midget in the garden’. Our visitor could have been forgiven for thinking we lived in Narnia rather than a residential estate in North Sheep Country.