October in Croatia is a must for foodies. This largely unexplored and unspoiled part of the former Yugoslavia is a jewel. Combine the beauty of a mountain-top walled towns with truffle season, local quality wines and oils and the glorious colours of Autumn and you have perfection (IMHO).

Our trip began in Zagreb, an elegant,  peaceful city with wonderful open air and indoor food markets, oh and a cathedral and other imposing buildings. We scooted through the market, past stalls loaded with fresh and bottled produce, to find somewhere for an early dinner and fell upon Kod Mike on Tkalciceva 59. It stood out from the pizza and burger restaurants around it, advertising local Croatian cuisine. It was busy. One waiter and one cook, who calmly dispensed food, one table at a time. Yes we could sit down but we would have to wait about 35 minutes. We were in no hurry and sat, watching the waiter scoot between diners, and the cook tinkle her little bell as dish after dish of delicious looking food passed our table, out onto the pavement or round a corner to another part of the restaurant. After about half an hour the young man got to us, a charming smile on his face and offered drinks. ‘I will bring you local beer,’  he offered and soon we were  enjoying bottles of Ozujsko and studying the menu.

Whizz chose a mountain of meat including locally produced sausages and much more,  more than one human should eat, but he is a trencherman of the first order and polished it off, pronouncing it good. I had something called Hot Kiss, which was diced steak in a spicy sauce, not unlike a Sechuan sauce, with gnocchi. It was not bad. The most enjoyable part of the meal, it has to be said, was the atmosphere.

The next day we headed off for Motovun. The journey promised to be scenic but rain pounded so furiously on the windscreen of our little VW hire car that we could hardly even see the road. Intermittent tunnels implied mountains above, and provided momentary peace from the stormy beating on the roof.

‘The sea is over there,’ Whizz  informed me at one point, but there was nothing but mist.

As we neared our destination the rain let up and we were entranced by mountainous hills swathed in trees.  A carpet of Oaks and  Aspens in golds and yellows, offsetting the dense, dark green of Pines, and Cypresses, their tops poking out and flopping over in the wind like sorting hats. Every now and again we passed small clusters of houses clambering over each other up the steep slopes or teetering on the top.

It was. I think this may be the beginning of a love affair with Istria. 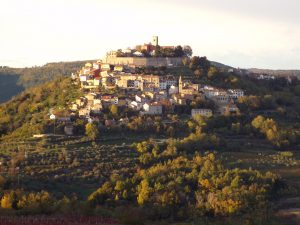 Only residents were allowed to drive into the town so our host, Hana, met us  just outside. ‘One can’t be too precious about the car, here,’ she told us as she negotiated the pitted and narrow streets, between houses that you could reach out and touch. We lurched through the forecourts of a couple of restaurants with tables to right and left, those on the right abutting a wall over which yawned open country as far as we could see. Hanna explained that we had arrived in truffle time. There had been a big truffle festival in the town the previous week and all restaurants and shops would be selling truffles (tartufi in Italian and Croatian) and truffle products. ‘You will notice that most people here own dogs – to search out the truffles.’

‘No, it is hard work and muddy.’ She laughed a little self depricatingly, as if that was something to be ashamed of. Perhaps was, is in a community so united in its adoration of the mighty fungus. ‘Food is Italian influenced,’ she continued. And despite it being the Sabbath, ‘The restaurants will be open when you want to eat.’

The car lurched to a halt in the middle of a steep street. Hana helped us into a gloomy hallway with our bags, and showed us into our home for the next couple of nights.

The apartment was just below the city walls on the side of the city shown above. Inside, the floors were of shiny black and white tiles and the walls hung with local limited edition prints (furniture was by IKEA). There was a spacious sitting/cooking area, a dining area with bathroom off and a large bedroom that looked out onto the mountains.

We had decided on a simple meal that evening, with a wish for a quick turn-around after our journey, so after unpacking a few essentials, we toiled up the cobbled street to the restaurant area we had spotted on the way in. I thought my lungs would burst, so steep was the climb and so heavy my body.

There were two shops, and between them, two restaurants. Without really considering which to chose, we dropped in to the nearest restaurant. It was completely empty, well, empty apart from the staff, who sat round a table chatting.

Any hesitation about our choice was dispelled when an elegant man rose and led us to a table by the window, presented us with menus and insisted we drink a sparkling wine, produced in his own vineyard. Were we likely to refuse?

I chose ravioli with mushroom sauce and truffles, Dave had tagliatelle with white truffles. ‘You must try this next wine, it is very special. We won a gold award with it.’

He poured two glasses of golden wine. ‘It should be served at 50 degrees,’ he explained.

We sipped. Nectar. It did seem wrong at first to drink white wine so warm but it was deep flavoured and very alcoholic and we soon got used to it. The meals arrived as did two more glasses of the wine.

Dessert was some kind of eggless tiramisu, accompanied by a glass of Muscat – you guessed it – from his own vineyards.

By this time I was in love not only with Motovun but the restaurant and its proprietor. We stumbled home, replete.

The next day we hauled ourselves more easily up to the second restaurant and brunched on excellent pizza. We decided to forgo the truffle ones in favour of Siscillian and Istrian – the Siscilian was better and would have been ample on its own but a usual we scoffed both before setting off to explore – uphill.

A path atop the wall circumnavigated the square. In the square, we whispered into the small cathedral/large church and then followed a sign to the tower.  The tower was a separate building, seemingly locked. A man stepped like magic from the doorway of a house. ‘Would you like to go up?’ He asked in a soft voice. ‘It is 20 kuna.’

‘For us both?’ Asked Whizz.

He weighed us up. ‘Per person.’ We paid up, it was less than a fiver.

‘One hundred and twenty steps to the top.’

Why am I doing this? I wondered as I studied, not steps, but open wooden stairs. It would be a hands and feet job and I tried not to think about the descent.

‘In the bell tower you must climb across the hatch,’ the man told us. ‘Then  through a hole onto the roof.’ Now he tells us.

We set off to his final words, ‘Don’t ring the bell.’

The view from the roof was spectacular (so Whizz told me). The bell was very nice.

I reversed back down and had a nice chat with the man, while Whizz studied the geography of the area, the route we had taken to get here, and checked out his shutter settings.

The man worked in Motovun in the summer. He lived somewhere else, I can’t remember where, and worked with horses in that other life.

We bid adieu  to the friendly/rip-off man and went back to the apartment, to collapse. Eventually we did the only lightweight thing that could be associated with us and changed into jimjams and went to bed at about 8pm.

The following morning with the help of Emil (stress on the Em), husband of Hana, and a friendly passing car, I was transported past Whizz and down to our hire car for the next lap of out journey, to Trogir, some five hours away.