The unexpected advantage of driving to Motovan in the teeming rain was that when we retraced part of our journey to get to Trogir, the scenery was completely new.

What an amazing sight! More mountains, tortuous ravines and eventually, glorious blue seas against a backdrop of crags, and a twisting coastline with trees dropping right to the water. Islands reclined in the bay and little boats puttered and sailed on the water.

We nosed the car into the town, across two bridges onto the island and squeezed through more narrow streets, up a steep climb until we saw our host waving to us from the veranda of our new home. Not quite as stylish but with a fabulous view of the sea. It also possessed, we later discovered, a bathroom that farted all by itself.

Our host, Darko (slightly uncomfortable about this name but he doesn’t seem to be), turned out to be a Canadian Croation. His English was fluent, as was that of his family.

We had checked the weather, and the following day, Tuesday, was set to be sunny with a high of 22 degrees, so when Darko told us that he offered days out on his boat and was free then, we booked his services. After dumping our stuff in the flat we tripped back down the hill for a look round and to visit the supermarket for picnic and breakfast food and something (pasta in the end) to cook that evening. We puffed back to our apartment.

Our first stop was on the island of Drvenik. Darko dropped us at one end of its natural harbour and recommended we walk round the water and back and he would wait as long as we needed.

The weather was warm and we seemed to be the only tourists. It was as if the local people were waiting for the summer to begin again. A couple of men sat drinking beer and a dog lay in the sunshine. Kittens pounced on bags of rubbish as we passed shuttered up holiday homes and peeped into crumbling buildings that must once have been used to process fish.

A statue, dated 1951 was of a Sylvester Stalone look alike. Naked to the waist and carrying a machine gun. Darko told us later he was probably a local partisan hero from the war. 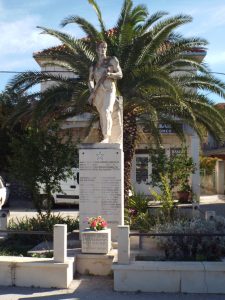 At the end of the harbour, opposite the waiting boat, we stared up at another statue, a woman, gazing out to sea, clutching a handkerchief and weeping. This was to commemorate, according to Darko, the children, evacuated to Egypt during the German and Italian occupation (For more information, click here) (and here). I shared the woman’s distress as she watched her children wave to her from a clandestine boat, wondering if she would ever see them again. 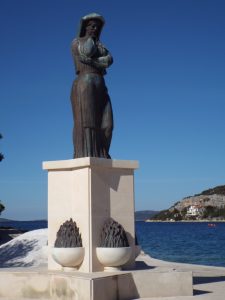 We strolled back and climbed aboard the 20ft traditional craft, looking forward to the cool breeze on the water. Darko turned up the speed and the water splashed in over the sides. Our next stop, Solta, was slightly larger but equally empty. It felt as though it was there only for us. We sat at a table in an empty bar and ordered squid and chips and drank beer, that’s all we did.

Darko then headed for what he termed ‘a beautiful, blue lagoon.’  As he dropped anchor he asked if we would like to swim and then lay back under the prow of the boat while Whizz wriggled into his trunks. I hadn’t brought swimming gear with me – in fact I didn’t even have shorts, so convinced was I that the weather would be cloudy all week. 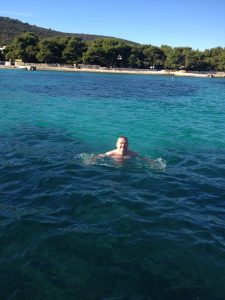 This was an excellent first day. We didn’t need to eat after our fishy lunch so the evening was spent in the apartment with wine and nibbles, planning our day at Krka National Park the following day. 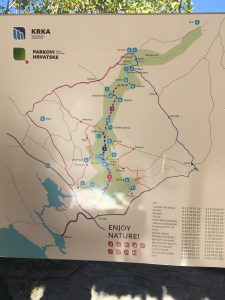 This jewel is an area of stunning beauty around a section of the Krka River. Its USP is the series of seven waterfalls that start at the top, with the highest, Manojlovaki Slap (slap is Croatian for waterfall). 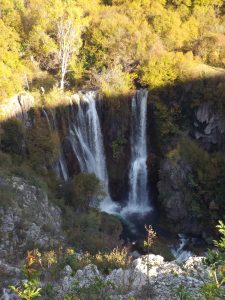 There is no point in my reciting loads of facts and figures but have a look here.

All along the river are other spectacular falls, finishing at the bottom with Skradinski Buk and below that, an enchanting network of walkways over the water and between little cascades.

I’m getting bored of my own voice now so will post the pictures that  rather inadequately tell the story. 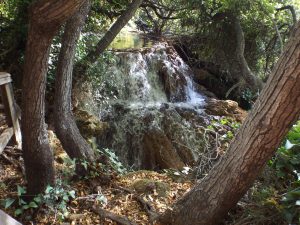 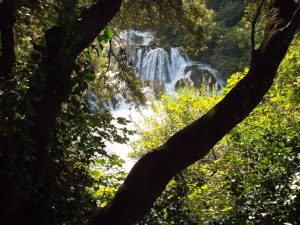 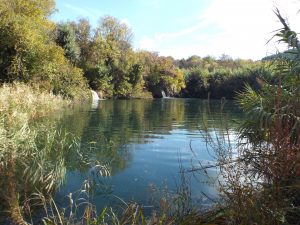 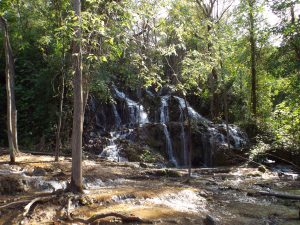 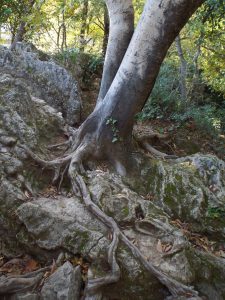 Everything we have done so far has involved steep climbs. If you don’t like hills I suggest you find another country to visit.

On our last morning we did a lightning tour of Split.

On his wall, Whizz has a picture, I think he bought from IKEA, of a reconstruction of Diocletian’s Palace in Split. I have looked at the picture nearly every day for the past 19 years and never realised that it was this place in front of which we Parked.

Diocletian must be turning in his grave at the cafes, stalls, shops and even hotels within the walls of his palace. That said, the area is very charming. The ancient parts bound together with more modern infill. 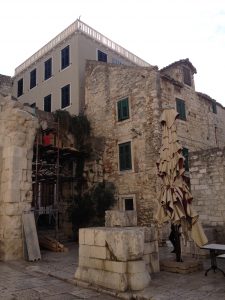 People live within the walls in tiny homes squeezed in where they will fit. 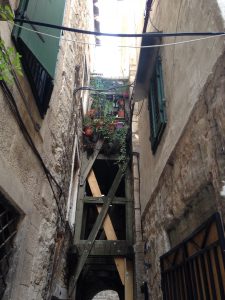 We drank coffee at a pavement cafe, expecting to be ripped off because of the location but it was cheap and good.

After absorbing the atmosphere for a bit longer we decided to follow the suggestion of Horace.

Horace was in Split a few weeks ago and recommended the climb to Marjan Park. She had already told us that it involved a climb of 300 or so steps but that was only half the story.

Walking from the Palace we found a narrow road that pointed straight up to the sky, and began to climb, and climb, and climb.  We arrived at the foot of some steps and climbed some more. Then we got to the 315 steps that led to the viewing point at the top. According to google we climbed for 3.3 km but it was a very steep 3.3 km indeed. 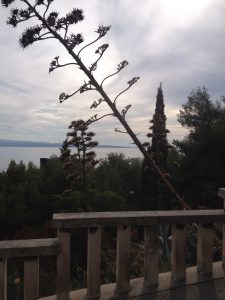 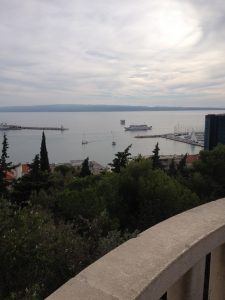 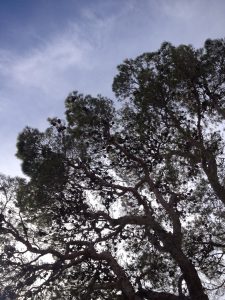 Croatia, through its membership of the European Union, has received a good deal of money to boost its economy and has invested it in tourism. The trunk roads, all subject to tolls, are new and fast, and at this time of year, empty. 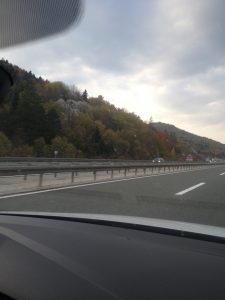 While we were in Croatia, the colours of the trees to either side of the motorway had become even more intense.  The lowering sun casting it’s yellow light on the orange and gold trees was stunning.

As we crossed the mountains near Zagreb on that last afternoon, the world turned from gold to grey. A wind rose, and leaves began swirling across the motorway and whipping under cars, then it began to rain. This drew a line under our fabulous trip, preparing us for the coming winter, back home in England.

There is no doubt in my mind that we will be back.