My Mum reminded me of this.

When I lived in Sheep country I bought myself a fabulous coffee table – well I thought it was fabulous. I was proud of it because it represented my independence in a new single life, after a rocky marriage.

You can see copies of my table all over the place now, but when I found it, it was in a small, independent shop and the owner told me that they would not be able to get many more because it had been manufactured from floorboards, taken from the homes of those who made their fortunes in India during the days of the Raj (Indian for rule). Those homes had now been stripped bare so the supply of floorboards was drying up.

I love my table. Sadly it is now too large for the lounge, but I resist getting rid of it because to me it is more than just a table. 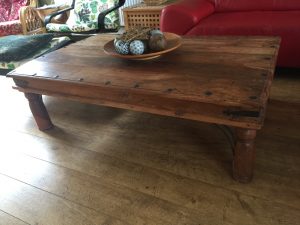 Anyhow, my marvellous parents were visiting Sheep Country from ‘daahn saaath’. They used to pop up quite regularly to look after Horace, while I was at work or away for a weekend. They had a key, and would walk through the front door, go to my drinks cupboard, which usually contained the remains of the Scotch they had brought last visit and, very generously, fill it with this time’s supplies. Then, while I was at work, they would sit and drink half of my month’s supply of wine (one wine box), which we would later empty during the evening.

During these visits Mum and Dad got to know a number of Horace’s school friends, and on this particular occasion the little girl from next door was in the house. We were all sitting in my living room admiring the new table.

‘Oh,’ piped up the little girl, ‘I wonder what happened to the old Indian.’