So I have time to blog, write, paint and generally catch up on domestic responsibilities. Well, that’s the theory, anyway. What has actually happened is that the time is, mainly enjoyably, slipping through my fingers. Nevertheless, here I am writing at last.

My dear uncle, mentioned in the previous post, departed this life recently. This was a devastating event, especially for his children, my cousins, and his older sister, my mum, who hobbled to the lectern and spoke very movingly at his funeral. Afterwards I was able, in his memory, to break my diet at the wake, on sandwiches, and a scone with clotted cream and strawberry jam. I gained half a pound when weighing in at  Slimming World on only my second week.

Death is not funny, but it is inevitable and over the years I, somewhat morbidly, have collected anecdotes about the interesting and sometimes amusing circumstances relating to it. This preoccupation might explain why I write books about people dying. Take a look here to read the first (so far the only, and I should be working on its sequel now – not blogging). 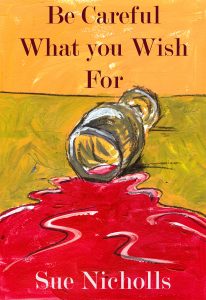 It is one of the characteristics of Brits, that we make a joke about the most terrible events – perhaps it is because we are not so good at putting our feelings into words. To many this tendency will seem horrible and insensitive, but you have to believe that we have the feelings, it’s just one of the ways we face the world with them.

My first story came from Woman’s hour,  years ago, and I believe the theme was that you can bury your loved ones in any way you choose. Something like that. The interviewee was a lady, let’s call her Imelda, I hope this wasn’t her real name, I don’t remember anything about her apart from what she did.

Imelda’s mother died after a long and disabling illness that kept her house-bound. Prior to her decline, Mum had been active and had many friends, but the friends had become equally disabled by age and so were unable to visit her before she died. 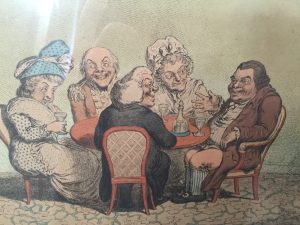 Upon her mother’s demise, Imelda decided not to leave her with the funeral directors and instead brought her and her coffin home, so that she could chat to mum and say her goodbye’s thoroughly. I’m not sure how long this took but having satisfied this desire, Imelda popped the coffin into the back of the car and took her mother to visit all her decrepit friends, so that they could bid her farewell, too. One can’t help wondering how the friends felt about this but clearly they were polite and offered tea and biscuits – to Imelda of course, this isn’t a Monty Python sketch.

Having done this, Imelda took her parent to her favourite spot, for a last look at  the view before she was returned to the funeral director’s for her final exit.

The second story is more a situation that tickled me, about a woman whose husband dropped dead while they were away on holiday in their caravan. He fell straight down the middle of the ‘van  so that she had to step over his body each time she made a cup of tea for the paramedics (we used to call those, ambulance men, I don’t think there were any ambulance women then, but now there are, it does seem more appropriate to give them a generic name). This picture has stuck in my head for years – I told you I was morbid.

More recently, the mother of a neighbour’s son-in-law died. The funeral was sad but went according to plan and the wake was held in the deceased lady’s beautiful garden.

The guests stood under the trees in the rolling lawns, sipping wine and nibbling on canapees when there was a gasp, and one of the older members of the group dropped down dead.

An ambulance was called and while the crew attempted, unsuccessfully, to revive the poor guest, the son of the lady whose funeral it actually was, had to make polite conversation with the remaining guests. Ghastly.

Finally, this week, here in Pebbleditch, a death with a hopefully happy ending:

I have changed the names and written this from my imagination as I was not actually present. Apologies if I got anything wrong.

Our village has been lucky enough to have a new football pavilion and the opening ceremony – albit some months after it started to be used – was held last Sunday. The celebration was also to induct local people in the use of the new defibrillator, installed on the wall of the building.

An expert in heart disease explained the symptoms that might indicate that a person was about to have a heart attack. 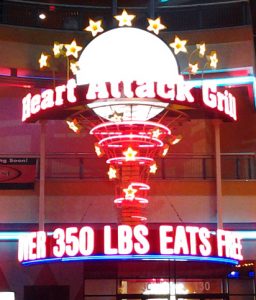 Raymond, the Vice Chair of the Parish Council, was sitting on a bench next to a somewhat generously proportioned gentleman.

Raymond looked at the man, who was sweating profusely.

‘Next the patient may become pale…’

The colour drained from the man’s face.

‘The victim may also become short of breath.’

At this point, the fat guy panted for a bit then dropped to the ground with a coronary thromboses. His heart stopped working and he had in fact, died.

You may be surprised to read that there were a number of paramedics on the scene and a defibrillator. He is now in a specialist hospital making his recovery.

I don’t know how to finish this post except with a joke, borrowed from my brother’s play, Losing Louis:

An old lady was very upset as her husband William had just passed away.  When she visited the undertakers to have a final look at her dear hubby she became distraught. Through her tears she explained to the undertaker that she was heartbroken to see her dearest William wearing a black suit, when it had been his wish to be buried in a blue one. The undertake apologised profusely, explaining that they always put bodies in a black suit, but he would see what he could arrange.

The dear lady returned the next day to have one last moment with William and when the undertaker pulled back the curtain, she smiled through her tears because William was smartly clad in a blue suit. ‘That’s wonderful,’ the lady cried, ‘but where did you get that beautiful suit?’

‘Well,’ explained the Undertaker, ‘Yesterday afternoon after you left, a man about your husband’s size was brought in and he was wearing a blue suit. His wife was quite upset because she wanted him buried in the traditional black suit.’

William’s wife smiled at the undertaker. ‘That’s such good luck. So you swapped the suits over.’

‘Oh no,’  the undertaker replied… 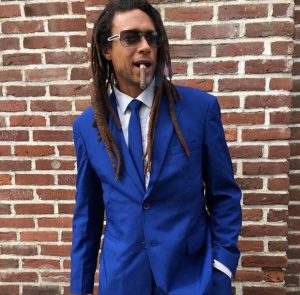 ‘We just swapped the heads.’